Advertise or Host a Radio Stream or Link from Only R20 per month!

Promote or Host your Radio Station Stream on the website domain that corresponds with your FM Frequency! Over 230 websites from 87.0FM.co.za to 107.9FM.co.za. See our Advertising Rate Card Here
- Click Here to Subscribe to SA-Radio.com Music News Feed and Gig Guide!

Send "Home" or "Car" or "Life" or "Funeral" or "MVA" and your Full Name, Age and Cell No. to: [email protected] or just go to www.MedSure.co.za, fill in the relevant form and we'll call you. 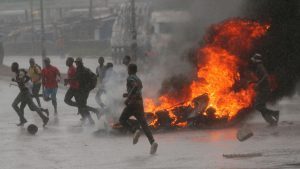 The spiraling economic meltdown in Zimbabwe has prompted South African authorities to think about extending short-term credit to Harare and helping it to write off a $7.4-billion external debt.

In an interview with the Daily Maverick newspaper, South African Finance Minister Tito Mboweni said the two governments were discussing ways to settle Zimbabwe’s debt to the IMF, the World Bank and the Paris Club.

The sides were also weighing up the possibility of extending an existing credit facility which Zimbabwe had with the South African Reserve Bank.

Zimbabwe had previously provided collateral for the loan in the form of its holding of SA Land Bank bills, the minister said, noting the country had always repaid its loans under that facility in the past.

Experts say Harare is clearly desperate for a bailout from South Africa and/or any of its other allies to resolve an economic crisis which is slipping out of control.

Thousands of Zimbabweans rushed to the streets last week in a nationwide strike after the government of the southern African country doubled fuel prices, making gasoline sold there the most expensive in the world.

Following hyperinflation in 2009, Zimbabwe abolished its own currency and has been using the US dollar and the South African rand instead. However, the economic crisis and foreign currency shortages have prompted the government to say that it would introduce a new currency of its own in the next 12 months.

Some experts say South Africa’s intentions to help its northern neighbor were due to concerns it would have to cope with a new influx of Zimbabwean refugees soon.

While the violent protests taking place in Zimbabwe are not affecting the local currency market, South Africa will likely be affected over time, said Bianca Botes, corporate treasury manager at Peregrine Treasury Solutions.

“Fears of a spillover and an additional rush of migrants are some of the top concerns from a socio-economic perspective that could further strain the already weak local economy,” she said.

According to Piers Pigou, senior consultant to the International Crisis Group, any money that South Africa channels to Zimbabwe will be wasted unless it persuades the government to make fundamental political and economic reforms.

“Zimbabwe desperately needs reform if the government is to keep the country reasonably stable and preserve its re-engagement with international donors, a process that started with Mugabe’s ouster,” he said as cited by the Daily Maverick.

Pigou added that “South Africans are mad to get engaged in this,” noting that he believed Zimbabwe was already deeply in debt to South Africa. “Over the past two decades, South Africa has put money in there or supported them in other ways, and I wonder if that calculation has been made.”

Looking for Things to do or need a Room, Hostel or Hotel or Car Hire?

This site uses Akismet to reduce spam. Learn how your comment data is processed.

To add your Radio Station, or Radio Stream, or to advertise on our network and discuss how you can use it to promote your business, please Contact Us here.

Type your name and cell no. here: